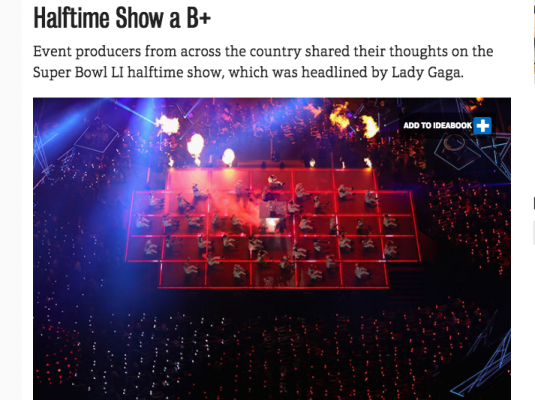 Event producers from across the country shared their thoughts on the Super Bowl LI halftime show, which was headlined by Lady Gaga.

While the New England Patriots came back during the second half to beat the Atlanta Falcons at Super Bowl LI on Sunday, the game highlight that had event producers talking was Lady Gaga’s halftime show. Kicking off on the roof of Houston’s NRG Stadium, the pop singer performed renditions of “God Bless America” and “This Land Is Your Land” before descending onto the field with suspended wires to perform an array of her hits from the past nine years. While there were no guest performers this year, the inclusive show generally received positive reviews from producers.

Event producers from across the country told BizBash what they liked and didn’t like about this year’s show, including the use of 300 Intel drones, LED torches held by a choreographed on-field audience, pyrotechnics, and the lack of an unambiguous political statement.

Justin Lefkovitch
“Super Bowl LI’s halftime show with Lady Gaga can be summed up in a word: professional. With a rooftop opening that alluded to Michael Jackson’s 1993 performance, Gaga played off the crowd well, stuck to the hits, had smooth transitions, and didn’t stray too far from her own dynamic comfort zone.

The production itself was beautiful, with a galactic smoking LED stage and structural towers featuring musicians and pyro to look larger than life while still mobile. In my opinion, the tech stole the show, between the 300 dancing Intel Drones and the choreographed crowd light displays.

I would have liked to see a better camera shot of the drones mid-show. Overall, Gaga could use a little aerial technique from Pink.”

Letter Grade: A-
Lefkovitch is the founder and C.E.O. of Mirrored Media, a Los Angeles-based experiential marketing agency. Clients have included SyFy, Universal, and Acura.