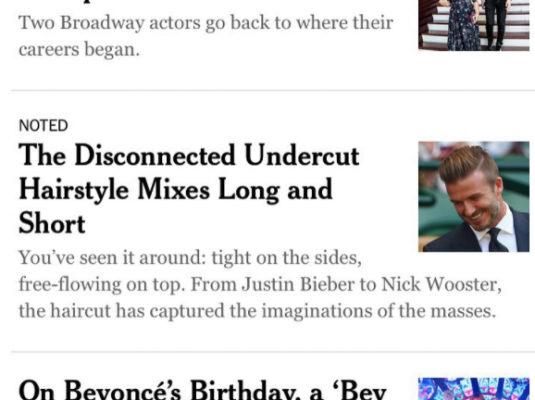 Short on the sides, longer on top.

For decades, those seven words, understood in every barbershop in the land, were told to the person wielding the clippers. Not anymore. Now the style is called the disconnected undercut, and these days it’s everywhere.

Nick Wooster, the men’s fashion industry veteran, has a disconnected undercut. So does Nathan McCallum, the men’s style blogger.

The Justins Timberlake and Bieber, along with Brad Pitt, are credited with popularizing the look, though it isn’t limited to men. The most influential disconnected undercut right now might belong to Ruby Rose, the actress who stars on “Orange Is the New Black.”…

Justin Lefkovitch, the chief executive of Mirrored Media, a music marketing firm based in Santa Monica, Calif., said that he went in a completely different direction, with a disconnected undercut that is “part of that man-bun family.”

“My hair is a little unruly, so I prefer not to do the greasy slicked-back look,” Mr. Lefkovitch said. “It’s a super relaxed, bunned up into a ball in the back. I call it the disconnected topknot.”

Ms. Pierce, who works at the Doves presented by Studio DNA salon in Santa Monica, said that she has been asked to do so many disconnected undercuts in the last year that she has become an expert at it. The style allows conservative older guys to be a little fashion-forward, she said, describing it as “barbering with a twist.”